We are constantly exposed to new concepts. Packaging even has had a makeover, with some firms like Pret a Manger trying this on their bottle water: ‘Best when chilled (as indeed we all are)”; and others, like Itsu, stating on their soup: ‘definitely not rabbit food’. Innocent smoothies have similar wacky messages.
This type of product description on packaging is known as ‘wackaging’ and it first appeared around 2000.

You will be interested, I know, in whether or not Falconbury has ever indulged. Well, as a matter of fact, ever keen to be in the vanguard of change (rather than being left behind in the guard’s van) we did have a tongue-in-cheek go at wackaging for our mini-mba course, back in 2004.

I thought it rather good, even though the experiment was short-lived, but I am sure you think it should have continued and that all training should be forced to be labelled in the same way. 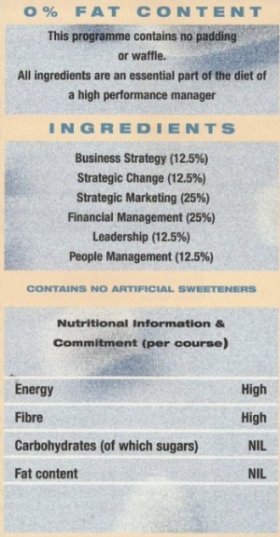